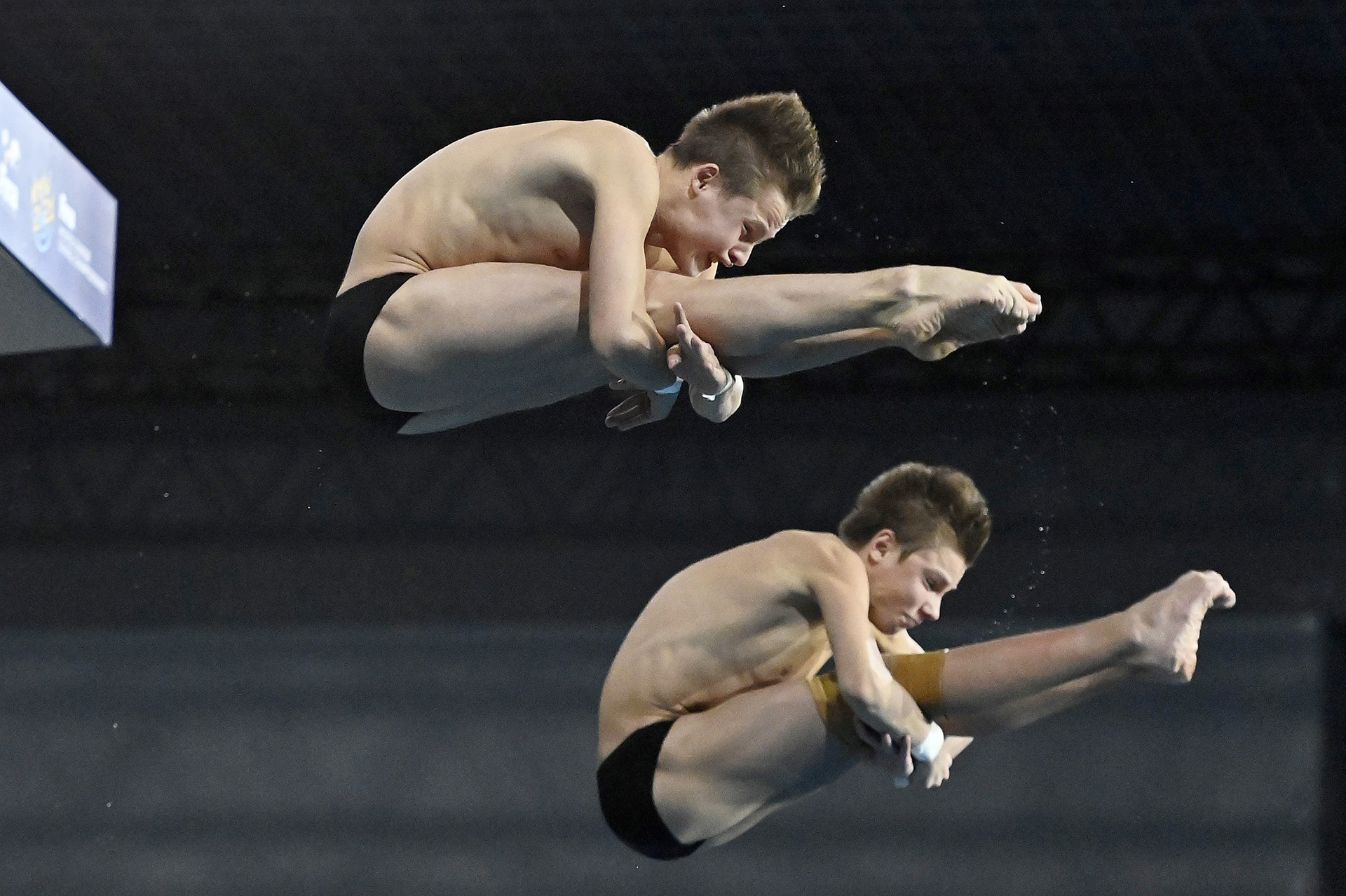 15 – 19 years old boys duos staged an engaging battle in a highly anticipated synchronised platform final. In total, 6 pairs took part in the final instead of 7 announced – Italians withdrew themselves from the competition. Three years ago duo Yevhen Naumenko and Oleh Serbin in this event celebrated the first Ukrainian bronze in Jr. Diving Worlds, 2018 in Kyiv. Today, Ukrainians clearly claimed to get more. Individual platform junior world champion Oleksii SEREDA in the newly created duo with Danylo Avanesov turned out to be top-scoring after the 2nd round, then they lost the lead to the Russian Maksim MALOFEEV and Sandro ROGAVA for one round, but in the fourth rotation Ukrainians returned to the first place. Their best scoring dive came on round 5 (Forward 3.5 Somersaults), assuming 78.30 points for the overall total of 321.30. The Russian duet became silver medalists, losing 18 points to the winners. The third place went to the Brazilians Diogo SILVA and Kawan FIGUEREDO PEREIRA as a result of a difficult competition with the German and Korean duets. For Kawan, this bronze became the third medal in this championship after A Boys 3 m springboard gold and A Boys 1 m bronze. A/B Boys 3 m Synchro bronze medalists Yeongho KIM in duo with Hyeon Seo JUNG, leading after the first round, eventually finished the competition in 5th place. Egyptians Mohamed FAROUK and Zyad MORSY finished in final 6th place.

Oleksii SEREDA, the winner: ” I knew that if Danya and I do everything right, we will most likely win gold. In general, 7 points is not bad, but I know that I can do it at 9 and 10. The same situation is with 4 dives. On the whole, not bad, I’m glad. I am happy with this medal, even more than the previous one, because here we won it together. We trained a lot, worked hard on it and this medal didn’t just fell from the sky, but had been going to it for a long time and everything worked out for us.”

Danylo AVANESOV, the winner: «I am happy that I took the first place with Lyosha. But there is always room to grow. Before the dives I didn’t think about the medal, the main thing was to perform well, not to overwhelm the dives and show a decent amount of points.»

Maksim MALOFEEV, silver medalist: “Everything turned out fine, except for one dive, we were a little upset about this, but we will continue to work and improve ourselves. We’ve been in the duet for 4 years already, but this is our first serious start in synchro. We perfomed a good result, I think. One dive failed.”

Sandro ROGAVA, silver medalist:” Everything is great, the pool is great. I am very glad that I visited Kyiv and won a medal.”

Kawan FIGUEREDO PEREIRA, bronze medalist: “I’m very happy, I’ve made some small mistakes and I want to adjust them for tomorrow’s platform event. I am a platform diver, my medals on the springboard made me very happy, but I love the platform more. It was very pleasant to compete with Oleksii Sereda. He is a very successful and talented athlete. When you have such a strong opponent, you strive to be better, and this is very important in competitions.”

15 – 16 years old divers representing 13 nations fought hard for berths to the finals in the Girls B 3m springboard. Trio of divers, who took the podium in A Girls 1 meter springboard, Ukrainian Kseniia BAILO, Italian Elisa PIZZINI and German Johanna KRAUSS had been dominating since early morning, prooving their leaders roles. In the same order, they settled after the first round in the final. Then Krauss bypassed Pizzini. Kseniia BAILO turned out to be top-scoring in each round, and there were no doubts in her eventual win. Her best scoring dive ( Inward 2.5 somersaults) came on round 2, assuming 64.80 points for the overall total of 390.15. This is Bailo’s second gold and the third medal in this championship. Johanna Krauss won silver with 367.00 score. Elisa PIZZINI had to be content with bronze. Girl came down from the pedestal in tears. Columbian Mariana OSORIO was the 4th. Sooyeon OH, Republic of Korea, lost to Russian Sofiia ZALUNINA only one tenth of the point in the fight for 5th place.

Kseniia BAILO, the winner: “I’m not even comfortable in front of the girls I competed with, that I became the first. They do not dive the platform, but I specialize in it and won a springboard from them. In general, the girls dived well, I was even worried, especially when I competed with them on the meter springboard. Today I was confident, I don’t even know why, on the platform I was not so sure.”

Johanna KRAUSS, silver medalist: “ I’m so happy, I dived better than in Preliminary but I really didn’t expect this result. 305 C turned out best for me in the final. Especially for me it is rather difficult dive and I am so happy than I’ve managed with it. Today, for some reason, I was more nervous than on 1 meter. ”

Elisa PIZZINI, bronze medalist: “I’m upset, I hoped for better. I finished the morning session just half a point behind Bailo, so I hoped to win the final. I hope I’ll have another chance tomorrow.” 23nd FINA World Junior Diving Championships launched on 2 December, 2021, in Kyiv, will come to a close tomorrow, on December, 9, as merits will be played for the Girls A/B 3m synchro springboard and Boys A platform.