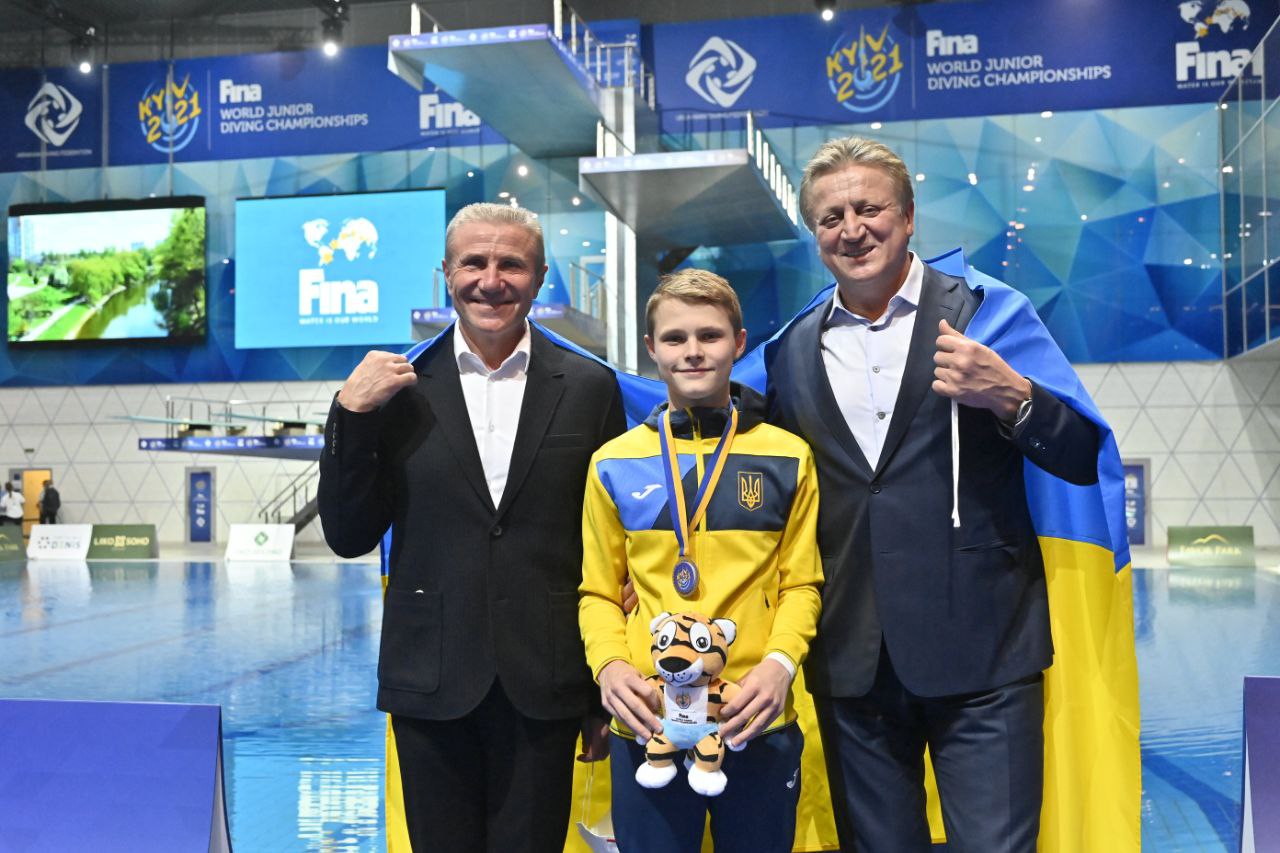 5 synchro duos started their fight for medals today. The Russians Ekaterina BELIAEVA and Anna KONANYKHINA declared the most difficult dive program. Their advantage grew as they performed two 3.2 DD dives. The result was a predicted victory with 283.83 points of the final score. The Colombians Tiffany BRAWN LOZADA and Mariana OSORIO were consistently in the second place after the second round where they hopped the Korean couple Nahyun KIM and Seoyeon KIM and won silver with 226.05. The fight for bronze between the Republic of Korea and Italy ended up with 9-point advantage of the Italian duo Maia BIGINELLI and Elettra NERONI. At the previous Junior World Championship 2018 in Kyiv, these athletes stopped one-step away from the podium with the 4th result. Turkish pair Simay ARSLANKAN — Sude KOPRULU finished their performance with 68.82 points behind the top three leaders.

Anna KONANYKHINA, the winner: “We really hoped that we would be able to break this series of failures and finally take the gold for the Russian team. At the start, we were calm and concentrated, our coaches told us to dive as good as possible. And we did our best. We really like how Ukraine has prepared for this Championship. Everything is well-organized, the testing system is well thought out, everyone keeps safe distance, and everything is acceptable and comfortable.”

Anna KONANYKHINA’s performances are over and her colleague Ekaterina BELIAEVA will perform at the platform, group “A”.

Tiffany BRAWN LOZADA and Mariana OSORIO, silver medallists: “We are very happy to participate, and much more happy to win the silver medal. We have been waiting for this competition for a long time and we are satisfied with our result. We had strong rivals, but we managed to do our dives well and get on the podium.”

Elettra NERONI, bronze medallist: ”We are so happy. I think we could do better, Maia and me, but we actually had only two days of training together here in Kyiv. However, of course, we are happy to win the medal. Dive107 B was the hardest for us as I had a problem with this dive two years ago. That’s why I always worry when I perform it. I really like Kyiv. I would also like to come here for the competition again.”

Jules BOUYER, France, had been top-scoring since early in the morning session and finished 37.45 points ahead of the nearest challenger Kawan FIGUEREDO PEREIRA from Brazil. Jules has been leading for all five rounds at the final. Posting two averbach dives – Reverse 2.5 Somersaults and Reverse 1.5 Som 2.5 Twists– to close his final program, he registered an impressive total of 502.10 points, with no other divers in close vicinity. Moritz WESEMANN, Germany, although did not cope with the third dive Back 2.5 Somersaults, caught up in the last two 107 B and 5152 B with incredible performance and high score 70.50 and 70.40 and guaranteed second place for himself with 481.45 points. Brazilian Kawan FIGUEREDO PEREIRA, in the final round beat the Ukrainian contender for the bronze Danylo KONOVALOV thanks to the successful execution of the 405 B – with 69.70 score. It is noteworthy that these athletes shared the gold at 3 meters individual, but today the Colombian, obviously, did not want to share the bronze with Ukrainian competitor.

Jules BOUYER, the winner: ”It’s very incredible, I’m very happy. I have a big victory today. I was happy to be in the top 12 at 1 meter. It was difficult to stay in the lead during all five rounds but it was my last competition in junior category so I tried not to make mistakes. ”

Moritz WESEMANN, silver medalist: “I had some problems with the third dive 405 C, but I’m very happy with the last two dives. These are my favorite dives. The most difficult, I think, it was Back 2.5 Somersaults. It’s my last final here, next year I’ll perform in adult competitions.” Leonardo GARCIA VARELA, bronze medalist: “I am not a sprigboard diver that’s why these medals are more valuable for me – gold on 3 meters and bronze on a meter.”

In the final of Boys B Platform, all attention was paid to the youngest European champion. Ukrainian Oleksii Sereda got this title in 2019 after he had won individual gold in platform at the home championship in Kyiv at the age of 13. Before that at the World Championships, Gwangju, South Korea, he made himself known after a sensational 4th place in both individual and synchronized (with Oleh Serbin) dives on 10m platform. As a result, he qualified for the 2020 Summer Olympics in individual competitions where he took 6th place. Sereda was in the lead in today’s Preliminary. Russian Alexander Kalashnikov was 84.3 points behind. Sereda remained an unattainable leader throughout all 4 rounds the best event points 86.40 for Armstand Back Double Somersaults 2.5 Twists and 484.60 score. Debutant of the junior world championship Maxim GULIDOV, Russia, confidently held the second position throughout the final. His gap from the Ukrainian is over 57 points. A participant in the Olympic Games from Germany Jaden EIKERMANN GREGORCHUK and a host athlete Danylo AVANESOV competed for the bronze. As a result, the Ukrainian lacked 6 points to get the medal despite the high points for 6245 D.

Oleksii Sereda, the winner: “I did well in the first two dives in the final, but in the third I made a mistake and scored 5 points. In general, the title of world champion is a good result for me, I showed a considerable amount of points, but the third jump I could do better by 8, 8.5 points. Today the competition was high, strong guys, some of whom I have already met at the World Cup and the Olympic Games. For me, this championship has just begun, tomorrow I will dive the 3rd springboard, then synchronized. At the end of these competitions there will be another championship of Ukraine, after which I will go to the Festival of water sports in Abu Dhabi. That’s why I will continue to train and prepare new dives. “”

Maxim GULIDOV, silver medalist: ” I am glad that I was able to perform in the first two dives very well and get 8 points for each of them. Such dives are not always successful in training. Thanks to my coach Inna Belevtseva. She is not here now, but it is completely her silver. I’m glad I beat Jaden, a participant in the Tokyo 2020 Olympic Games. This, I think, is a special victory for me. This is my first international competition of this level. I am very impressed by the local atmosphere, everything is at the highest level.”

Jaden EIKERMANN GREGORCHUK, bronze medalist: “Of course, I could have done better, but what’s done is done. This is a competition, the strongest and more successful wins. In the preliminary round I did not succeed in all the dives,so I had to gain points in the final. ”

Competition day 6 will play out 2 sets of medals in the Boys B 3m springboard and Girls A platform.