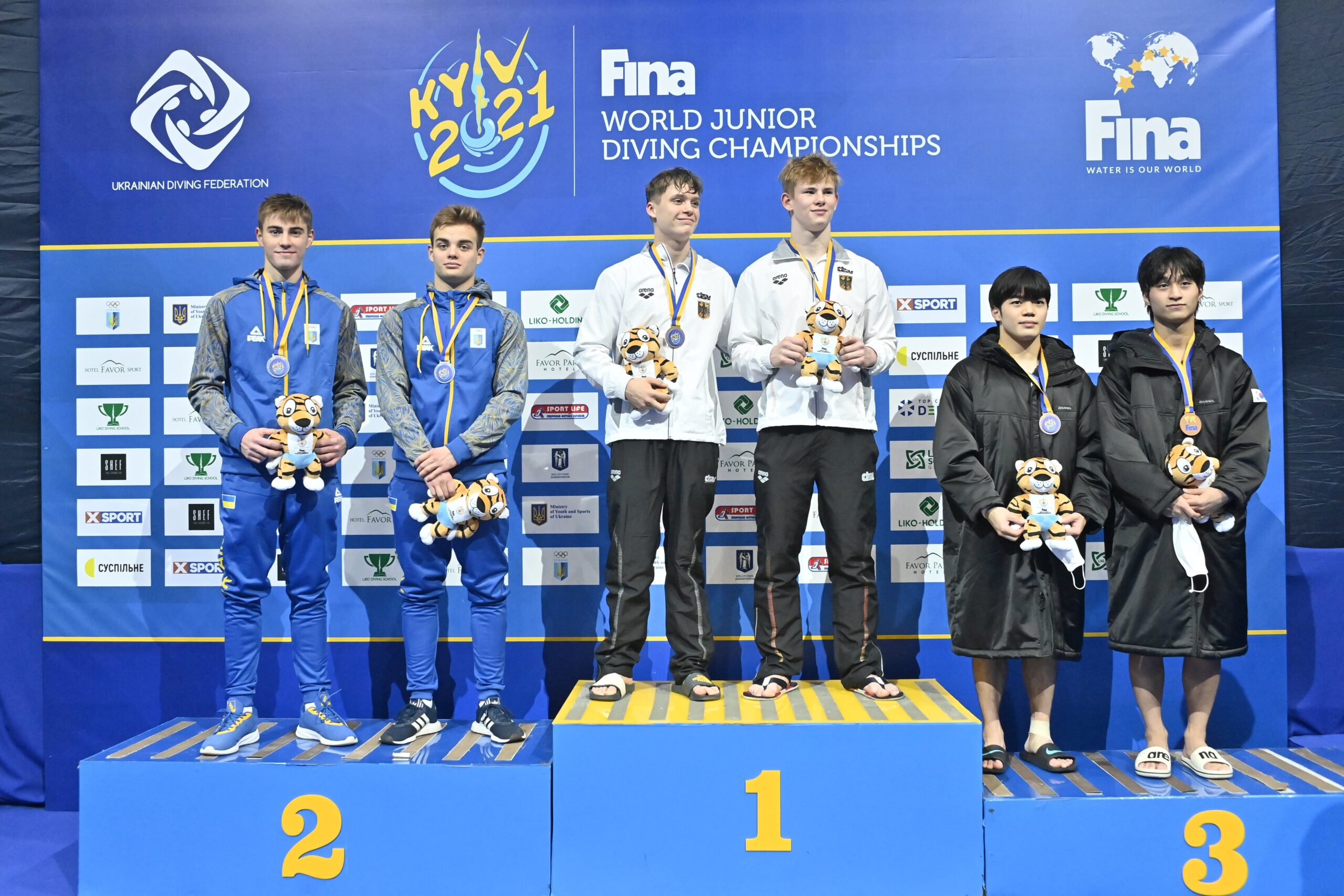 GIRLS A 1M SPRINGBOARD Emilia Nilsson Garip from Sweden booked her lead early in the prelims, first headed into the final round with 395.85 points. However, she didn’t manage with the second dive – forward 2 ½ somersaults and finished final in third place with 389.45 points. Uliana Klueva from Russia defends her silver title for the second time as she won 3 years ago in Kyiv. German athlete Jette Muller celebrated the victory. She was 8th in the prelims but successfully performed in the final. Her last dive, reverse 1.5 somersaults 1.5 twists, gave the Jette 57.20 points for the overall 392.35 points score. Home athlete Anna Arnautova, Ukraine, held the lead after the second and third dive but eventually finished the competition on 4th place. Chart of the 12 athletes in the final showed us a close competition for the medals. Kuzina Elizaveta from Russia finished fifth with a deficit of 12 points to the podium. Valeria Antolino of Spain came sixth with 370.10 points overall as Nais Guliet of France and Steffanie Madrigal of Columbia were 7th and 8th, earning 361.70 – 361.05 points respectively.

Jette Muller, the winner: “I am very grateful for my victory and I am also very thankful. I want to thank my coach and my family for supporting me.The last dive was the most successful for me and the most difficult. I also want to win a medal in 3 meter and synchro in this Championships. This year I won the silver medal in team event in Junior European Championships.

Uliana Klueva, silver medalist: ” Of course, I’m glad that it ended up with winning a medal, but it is a little pity that it was not enough to win. This is my fourth silver in the world championships, I want to get gold finally. We need to work harder. Tomorrow I will perform in individual 3 meters and in synchronized pair with Elizaveta Kuzina, also from 3 meters springboard.”

Ukrainian Kseniia Bailo, who became bronze medalist in B Girls 1 meter yesterday, today has enriched her medal collection with gold in B Girls platform. Ukrainian was the leader of the morning session with 338.15 points.  But in the final she had to compete with Uliana Manaenkova who was also going to get gold. After first dive Kseniia lost leadership to Russian athlet who had 65.80 points for reverse  2 1/2 somersaults  dive. But successfully completed last dive back  2 1/2 somersaults 1 1/2 twists by Kseniia Bailo eventually allowed her to reach the highest step of the podium with 328.35 points. Ana Carvajal from Spain became the bronze medalist.

Kseniia Bailo, the winner: ”It was much easier to compete in the morning. Before the first dive in the final I was excited. Although I felt very well, I felt great, but something went wrong, and what – I do not understand, I still do not understand. But I did not want to let my medal go at all, I followed through and reached my goal. The preparation was tremendous, the training, there was a serious training session in Turkey and here is the result of our work. Before the competition I hoped to win, but I didn’t ‘wear a medal’. I want to thank our president of the Ukrainian Diving Federation Igor Lysov, my coaches, parents, friends, everyone who helped me!”

Ana Carvajal, bronze medalist: “I am very proud. I wasn’t sure if I win a medal. I didn’t count my points not to worry. I think, reverse 2 ½ somersaults was the most difficult for me today.”

A serious fight for medals took place in Boys A/B 3 meters Synchro springboard. Russian duo was in the lead after three dives but did not cope with the fourth, the most difficult in their program – reverse 3 1/2 somersaults. And eventually, they finished the competition in 5th place. Ukrainians Bohdan Chyzhovskiy -Danylo Konovalov also claimed victory, but Konovalov stepped on the edge of the springboard while doing forward  2 1/2 somersaults 1 twist. They won silver medals with 282.36  losing only half a point to the German duo Espen Prenzyna – Jonathan Gisbert Schauer. Korean duo Dongmin Joung- Yeonglo Kim won bronze medals, 278.31. After the third dive forward 3 1/2 somersaults, for which they received 66.96 points, athletes consistently held the third position.

Espen Prenzyna, the winner: “Exciting feelings. Me and Jonathan Gisbert have been training in pairs for only 3 or 4 weeks, it is our first competition together and we have already won gold! We have been working hard during this short time and reached such a good result. Dive 305 B was the most difficult for me because I already was a little nervous, but we had to focus and we did it!”

Jonathan Gisbert Schauer, the winner: “I can not believe that we are the world champions! During the last jump, my heart was pounding so much that I thought it would jump out of my chest.”

“I have wanted this award for two years, I planned to get it at the European Youth Championship, but it didn’t work out and now I’m glad to have it. Although we lost in a half a point, I’m very happy, incredibly happy. To avoid such mistakes, we need to train hard.”

Danylo Konovalov, silver medalist: “With a fighting spirit we went to the start, tuned to get the first place. We didn’t cope with the beginning of the first 403B dive, although we have trained it for a long time.”

The 22nd FINA World Junior Diving Championships staged in Kyiv until December, 9, will reach its height tomorrow with 2 more medals sets on offer – in the Boys B 1m and Girls A 3m springboard.