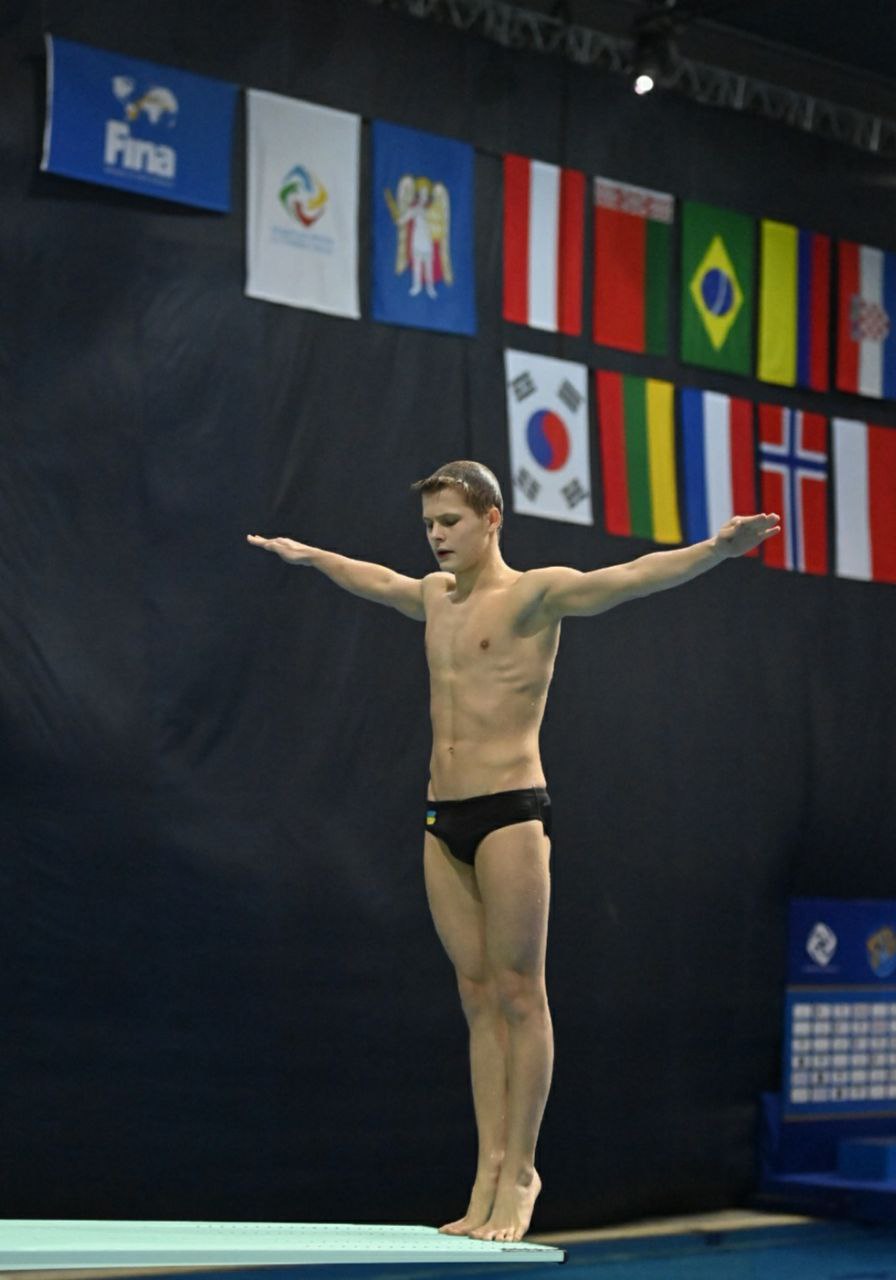 A new generation of the world’s top divers, aged 15 – 16, showcased their rising skills on the 3m springboard. Two Italians, two Matteos — Santoro and Cafiero — were top-scoring during the morning session with 30 points before third-ranked Tomas TAMAYO MENESES, Colombia. But in the final, the serious fight for gold began between SANTORO and Ukrainian Sereda. Freshly crowned Boys B platform champion Oleksii SEREDA was in the lead after the start round. In the second round, a challenge awaited him: in Preliminary Sereda failed the dive Back 2.5 somersaults but in the final, he successfully coped with it having received 75 points. Despite this after the second round, Matteo was ahead of Oleksii by only five hundredths of a point. After the third round, this gap widened to almost 8 points. As a result, the Italian won with a difference of only one and a half points and 430.30 final scores. SANTORO’s namesake-teammate Matteo CAFIERO won bronze thanks to high points for two last dives. B Boys 1 meter platform medalist, Matej NEVESCANIN, Croatia became the 4th. Behind him were Russian Nikita Zhukov and one more host athlete Vladyslav KLIMKO.

Matteo SANTORO, the winner: ”To tell the truth, I was very nervous because it is my first competition at such a high level. Now I feel really happy. The third dive 5154 B was the most difficult because I performed it only a few times before so I was a little scared. But now I’m terribly happy about my first title in the world. Thank you, Kyiv, for all these emotions! Oleksii Sereda is a real legend for us. ”

Oleksii SEREDA, silver medalist:” I assumed that I could be in the top three, but I still have to work and work on the springboard. It’s not easy to stand on it and win. It seems to me that I have not deserved it yet, so I will work and then in the future, I may win. Will I change the platform for a springboard? No. The platform is my main and favourite discipline.”

Matteo CAFIERO, bronze medalist: “I am very happy with this experience and having the medal. But I could do better, I think. Dive 305 B got me excited because before I had problems with it. And, of course, my competitors were very strong. I am also happy to share this podium with my teammate Matteo SANTORO and Oleksii SEREDA.”

German, Pauline Alexandra PFEIF, the morning session winner, confidently led from start to the third round where she did not manage with 107 B dive and let the Russian Ekaterina BELIAEVA A/B Girls Platform Synchro gold winner, go ahead and eventually win the event. Her best scoring dive came on round 4 – Back 2.5 Somersaults 1.5 Twists – assuming 75.20 points for the overall total of 406.65. The second position had been held by the Maia BIGINELLI also until the third round — Italia failed 205 B dive and eventually finished the competition in 6th place. Another representative of Russia Elizaveta KANSO won the fight for third place against the Romanian Nicoleta-Angelica MUSCALU. Italian Elettra NERONI is the 5th.

Ekaterina BELIAEVA, the winner: ”This is the second gold in a row at the championship. Of course, I am very happy. It is the world championship! It is a pity that very strong athletes had not come, but we did our best and everything worked out for us. Yesterday’s award did not relax me, because for each start you adjust in a different way. Synchrony is done, then everything is forgotten and everything is new. A new start, a new preparation for the individual. In the previous competitions, I dived worse, but I adjusted to the finals. Adrenaline, pulled my socks up and everything worked out. The coaches praised me.”

Pauline Alexandra PFEIF, silver medalist: “Preliminary was quite good for me and I hoped for a gold medal, but obviously couldn’t handle the excitement. I could pretend for gold, the marks in the final were higher than in the morning session. The competitors were strong, but I could beat them! But I am proud of myself definitely. ”

Elizaveta KANSO, bronze medalist: “To be honest, I didn’t expect it, because I didn’t dive well in the preliminary competition. But I got ready for the finals, smiled, thinking about good things. I dived for fun. Of course, I am very glad that I won this bronze medal. In 2018, I also had a bronze, here, on a 1-meter springboard. I love this pool very much. I am very happy that I came here again.”

23rd FINA World Junior Diving Championships is being held at the state of the LIKO Sports Center and will finish on Thursday, 9 December. There are 2 events on the program for Competition Day 7: Boys A/B platform synchro and Girls B 3m springboard. Preliminaries will get launched at 09:00 in the morning, followed by the finals scheduled to kick off at 15:00