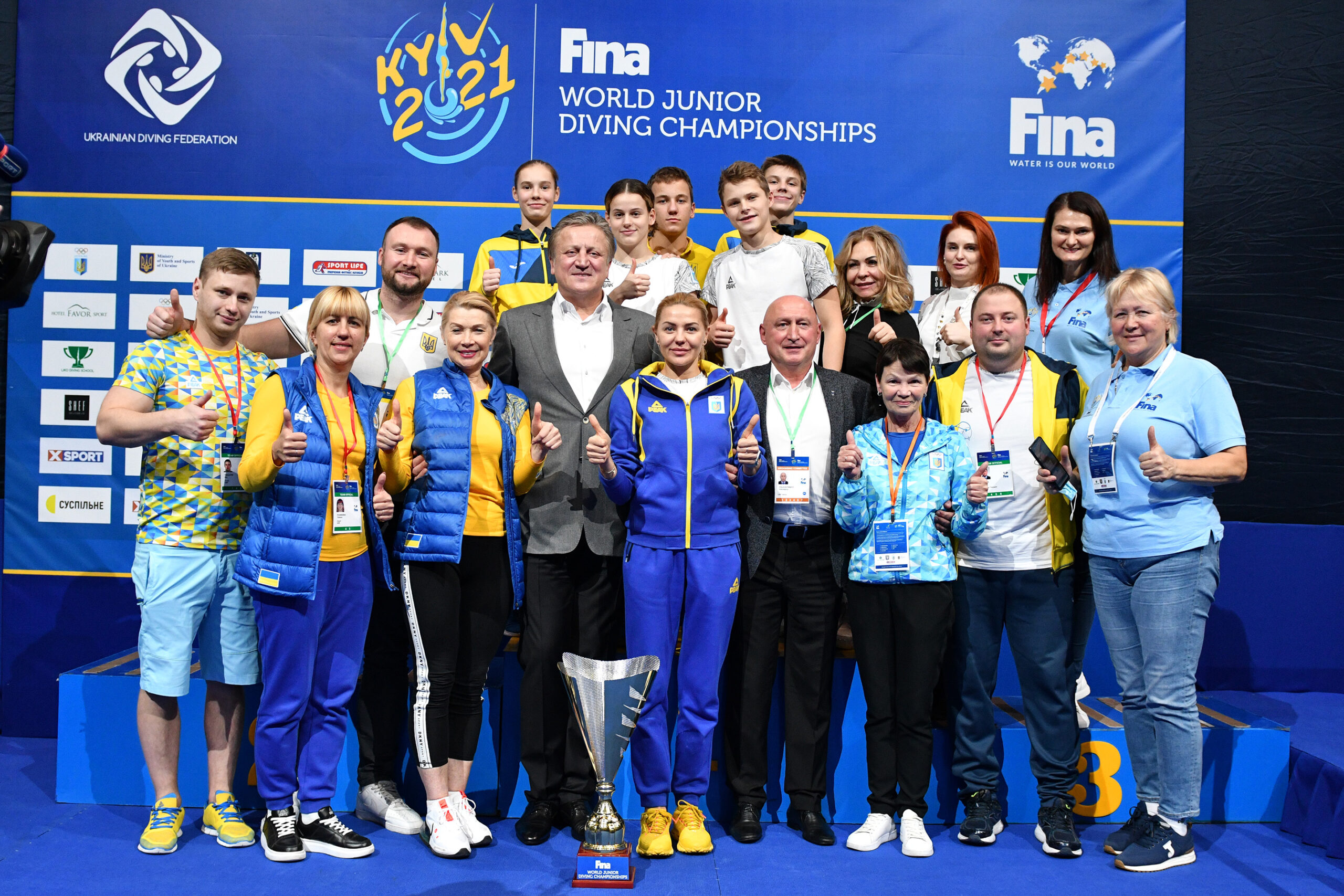 Frustrated that she could not win the competition on B Girls 3m Springboard, bronze medalist Elisa PIZZINI, as she has promised yesterday, today entered the fight for gold in synchro. In pair with Rebecca Jade Rachele CURTI, they were in the lead until the third round, but then, due to an unsuccessful jump Reverse 2.5 Somersaults, Italians moved to third place, losing the leadership to the Russians. Uliana KLUEVA, the silver medalist in this event of a previous junior world championship in Kyiv 2018 in duo with Vitalina Koroleva, has become the winner this time, paired with Elizaveta KUZINA. The last two dives, 205 B and 5152 B, brought them 63.90 points each. Since then, impossible to reach and beat, Russian rookies, registered 283.50 points overall. Ukrainian Kseniia BAILO, two-time jr. world championship 2021 and also bronze medalist, claimed one more medal in the newly created duo with Anna ARNAUTOVA. Ukrainians won silver with a margin of almost 16 points from Russians. Bronze medalists Rebecca Jade Rachele CURTI and Elisa PIZZINI were separated from second place by 10 points. The Swedes Nina JANMYR and Emilia NILSSON GARIP in the last round overtook the Germans Julia DENG and Jette MÜLLER in the fight for 4th place. The difference in points was 2.5 points.

Uliana KLUEVA, the winner: “We are very glad that we won the gold medal and ended our junior career on such a high note. We made such a good finish point. We are happy. The most difficult thing today was getting ready for the competition. I don’t know why, but this day was very exciting for me. In general, I liked the atmosphere in Kyiv and accommodation, and food and swimming pool, everything is organized at the highest level.”

Elizaveta KUZINA, the winner: ”Yes, indeed, today it was very difficult, but we coped with the excitement and I am glad that both the season and the junior career ended so successfully for us. This is not our first time here, we took part in the championship in 2018, I was also here at the 2019 European Championships, so everything is familiar. ”

Anna ARNAUTOVA, silver medalist: “This is the debut of our couple, who have never performed at international or Ukrainian competitions. It was very easy and good for us to dive together, there is a mutual understanding. We would like to dive together, we just need to complicate the program as much as possible and we will work. I am glad that I won the silver medal. After all, before the championship I had treated a knee injury, had not trained for a long time, I am happy that everything ended so well.

Kseniia BAILO, silver medalist: “I felt tired due to a large number of starts in this championship, but I tried to do the best today and go on to a well-deserved rest. But Anna managed to rest for a few days. I really wanted Anya to win a medal and feel these positive emotions.”

Rebecca Jade Rachele CURTI, bronze medalist: “We are very happy. Of course, we could have done better, especially I, but we are still very happy with this medal. We have been diving in duo since February and this is our first medal together.”

Elisa PIZZINI, bronze medalist: ”This bronze in synchro is more valuable to me than an individual one. ”

Two Russians Maksim MALOFEEV, A/B Boys Platform Synchro silver medalist, and Ivan KARPOV were seen on top after the Preliminary. Tom Laszlo WALDSTEINER from Germany was in the lead after the first round in the final. Then, 77.55 points for Back 3.5 Somersaults brought Maksim MALOFEEV to first place. He finished the third round with – four «nines» and 90.10 in total and became unattainable for his rivals. 529.00 is the winner’s score. Tom Laszlo WALDSTEINER did not cope with the fourth dive Reverse 3.5 Somersaults and moved from second to 4th final place. The same dive was a good success for the Brazilian Kawan FIGUEREDO PEREIRA. With 81.60 points and entered the fight for medals. Brazilian, who collected three medals at this championship on the platform and on the springboard, performed in BOYS A PLATFORM the most difficult list of dives from 3.2 to 3.7 and eventually won bronze with 476.20. Brazilian fight for silver prevented the incredible last dive of Colombian Leonardo GARCIA VARELA for which he received the highest points of the last competition’s event – 91.80!

Maksim MALOFEEV, the winner: “This is my final start in juniors. Not everything worked out in the competitions, synchronized dives did not work out. I am satisfied with the individual performance on the platform. Of course, there are some drawbacks. We will continue to work.” Leonardo

GARCIA VARELA, silver medalist: “I did a very hard job before taking part in this competition and it is great to see the results of this work. Thanks to my family and coaches for their support and faith in me. I am happy to have won the silver medal for my country. This is a very good result for me. Of course, like any other athlete, I could have performed better, but silver is also a great result.”

Kawan FIGUEREDO PEREIRA, bronze medalist: “I am happy to win four medals in this championship. The hardest thing for me was today’s bronze on the platform. In the Preliminary competitions, I failed the first two dives and in the final, I had to work harder and do better than other athletes, in order to eventually win a medal.”

The national team of Ukraine won 1st place in the medal standings of the World Junior Diving Championships 2021. Ukrainian athletes won 5 gold, 3 silver and 1 bronze medal. This is the best performance in the history of Independent Ukraine. The cup for second place was awarded to the German national team. The teams of Ukraine and Germany won the same number of gold, silver and bronze medals, but Ukraine was in the lead in the number of team points – 360.00 against 349.00. The cup for third place went to the Russian national team. There are 4 gold, 6 silver and 1 bronze award in the team’s medal box. Russia also was the best for team points – 514.00.